Home › Jewish Holiday Gateways › Chanukah › The Courage of the Women

Channah and her Seven Sons

The times of the Greeks were terrible times. The stretched their hand out in overbearing might; they oppressed us, and they murdered us. They were not content to take our money, they wanted our very souls.

The Greeks forced upon us terrible things, the worst of which was idolatry. Idolatry, the worship of false gods, is the worst sin of Judaism. Worshiping idols is ripping out the very heart of Judaism from within oneself. But the Antiochus, king of the Greeks, wanted total control. If we did not obey him, and worship his idols, we were rebellious, and he felt that he had to kill us. 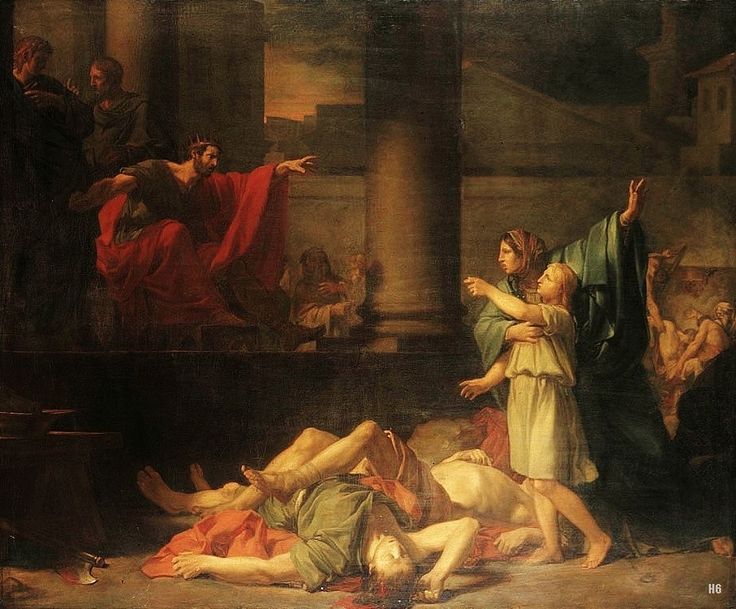 “The Martyrdom of the Maccabees”, Jean Baptiste Vignaly, 1781.

Antiochus considered himself a god too. Antiochus gave himself an additional name: Epiphanes, which means «god incarnate.» He wanted us to bow down to him and worship him like we worship Hashem. He placed images of himself all over the land, and forced Jews to bow down to these idols.

Antiochus warned the woman that if she and her seven young sons did not bow down to the idol, he would kill each of them one by one, while she watched. They did not flinch.

Antiochus started with the oldest son. He tried to convince him with flattery and bribes, but the boy would not hear of it. He stridently repeated our Tradition of steadfast devotion to Hashem, and told the king in no uncertain terms that he would never forsake the Torah of Hashem. «So kill us now — and send us quickly to Hashem!»

Antiochus became enraged. He ordered his servants to cut off the boy’s tongue, hands, and feet, and to flay the skin of his head. He then had them place it all on a frying pan over a fire, while the mother and all seven were forced to watch. Antiochus the Wicked then ordered his servants to place the still living victim into a copper pot over burning coals. As the Jewish boy was about to die, Antiochus had his servants remove the pot from the fire so that the victim would die more slowly. All this took place in front of Channah and her other six children.

But they all stood strong and steadfast. I will not go into any more detail of the horrible tortures perpetrated upon all seven children, all while the mother was forced to watch. Nor will I discuss how Antiochus tried to convince each child to abandon Judaism and worship him.

Last of all came the youngest son, the seven-year-old. He, too, refused to worship the king, and remained forever a loyal Jew. Just before they killed him, Channah made this statement: «Go, my children, and tell our ancestor Abraham, ‘You were prepared to kill one son for the sake of Hashem., I have given up seven sons for the sake of Hashem!’»

When the last child had died, Channah, the pious and pure, supreme in her devotion, stood over the bodies of her seven sons, and lifted her hands skyward.

«My heart exults in Hashem. My pride is uplifted through my G-d . . . my enemies were unable to entice even one of my sons to turn to the service of my enemies’ delusions, the idols, which are of no avail and cannot save anyone, for such idols are nothing and they are worth nothing. There is nothing that is as holy as Hashem, and He is the only one savior of the souls trusting in Him. . . Show me the place You have designated for Your servants, my sons who died for the holiness of Your Torah, and bestow upon me a small portion together with them. All Your creatures shall praise You, Your devout ones shall bless You, and so will I together with them.»

When she had finished praying to Hashem, her soul departed her, and she passed away. She fell over the bodies of her sons and lay on the ground together with them.

That is the story of Channah and her seven sons, the brave mother and children who gave up their lives for the Torah, as the Torah commands us to do. It was the mother who gave the children the strength to uphold their convictions. And so, on Chanukah, we celebrate the courage of this woman, and many other women like her. That is one story that illustrates the courage of the Jewish women, and the reason that women have a holiday for the first half hour after the Chanukah Menorah is lit.

Yehudis (Judith), the Daughter of the High Priest

The Greeks forbade us not only our religion, they also forbade us our home lives.

The Sages of the Talmud were very reluctant to describe in detail the horrors of the indignities inflicted by the Syrian-Greeks, especially the decrees they made concerning women. The Sages would only hint at some of these things, out of respect for the dignity that is woman. But we do know of some things, mainly because the heroism of those great women was recorded by the Rabbis.

In order to destroy the sanctity of the Jewish home, the Syrian-Greek kings would appoint officers in the towns of Israel to take advantage of all brides. It was forbidden for any woman to get married without first visiting the presiding officer. This decree was in effect for three years and eight months.

During that time the Hasmonean Priests were victorious in their battle, and regained the Temple Mount. They restored the holy service to the Holy Temple, but continued to be under the political control of the Syrian-Greeks. Greece was still in control, and they still demanded that the women be brought to them. Ten months passed.

One day, a daughter of the High Priest’s family became engaged. Her name was Yehudis (Judith, feminine form of «Judah»), and it means «Jewess». She was given that name because of an allusion within it: The name Yehudah (Judah) is spelled like the Name of G-d with the letter daled in it, and the word daled, in Hebrew, means poverty. As if to say: the Name of G-d looks poor now, but soon shall it rise.

In most cases, people would either refrain from getting married, or get married secretly. But this option was not open to Yehudis, who was of a priestly family, and who was marrying a priest. Her family was too well known. And so, the king’s official came to collect her. The family did not allow him to enter.

But the Syrian king, Eliporni (Holofernes in Greek), heard that his officials had been killed, and he gathered his army and marched upon Jerusalem. He surrounded the city, and lay in siege.

Yehudis saw that this would bring no good, for all the people would die of starvation and thirst if nothing were done. So she volunteered to go to the king and rescue the city. At first they would not let her go, but she prevailed upon them, saying that G-d would surely help her, and they finally let her go.

She prepared a large bag of food to take to Holofernes, salty cheeses and other delightful foods. She left the city, and announced herself to the Syrian guards, showing them what she had in her bag, and explained who she was. They took her to the king.

When she came before Helefornes, he greeted her with joy, and he made a lavish feast in her honor. She refused the food (as it was not kosher), and invited the king to share the food from her bag. And so, she and the king ate cheese from her bag, and the king added food from his own table. Soon, the king asked all his officers to leave, and he and Yehudis sat alone together, eating. She pretended to eat, but really she only nibbled. But the king ate with great gusto.

As King Helefornes ate the cheese, he became more and more thirsty. In those days one didn’t drink water or juice at the dinner table, one drank only wine. And drink he did. He was so thirsty, he drank goblet after goblet of wine, until he fell into a deep sleep. Like the noble and brave Yael, in the days of the Prophetess D’vorah (Deborah), Yehudis did not quaver, she did not fear. She did as she knew must be done to save her people. She drew the king’s sword, and took his head off with it.

She put Helefornes’ (king no longer) head, and put it into her bag. She left his private place, and returned to the city, announcing herself to the Greek guards as she did so. She brought the head of the dead king to the leader of the army of the Jews, who hung it on the wall of the city, where it would be visible to the Greeks. When morning came, the Greeks arose, and gazed with bewilderment on the head of their king. Panic-stricken, they broke ranks and fled.

And thus was that decree of the evil Greeks broken. In honor of the women, who like Yehudis, gave much towards the miracle of Chanukah, a minor holiday was declared especially for them, and they are to do no work for the first half hour that the Chanukah lights burn.

Many people, in remembrance of the miracle at the hand of Yehudis, eat cheese or dairy products, to remember the noble deed of Yehudis.

The version I cite here is from three primary sources: the Midrash, a work called Chemdas Yamim, and a liturgical poem found in some prayerbooks for recital on Shabbos Chanukah.

Other versions of this story have been told. Most are retellings of the Apocryphal book of Judith, which has a confused version of the story, citing, for example, that Helefornes was a general (instead of a king) in the army of Nebuchadnezzar (who was Babylonian, not Syrian-Greek), about 300 years earlier. There are many problems with the version found in the Apocrypha, not the least among them the fact that during the rule of Nebuchadnezzar there was no Jewish community in the Land of Israel. And contrary to the book of Judith, when it was all over it was Nebuchadnezzar who was victorious, not the Jews against him. So I wouldn’t take the version from the book of Judith too seriously.

May G-d grant us peace in this world, in our lifetimes, and may all the wicked repent today.