After the death of King Solomon, the kingdom of Israel got broken up into two kingdoms: Israel and Judah. Israel comprised the Ten Tribes, with Ephraim as their leader. The Kingdom of Judah consisted of the Tribes of Judah and Benjamin. (For more background on this and earlier periods in Jewish history, read my article on early Jewish History.

In Hebrew, Judah was called Yehudah, after the name of the Patriarch Yehudah (Judah). The people were called «Yehudim.» (Singular: Yehudi for a man, Yehudis for a woman.)

The Greeks, however, called Yehudah «Iudea.» When the Roman Empire eventually replaced the Greek Empire, they, too, conquered Iudea, as you know. In Latin, Iudea became Judea; Iudeans (Yehudim) became Judeans; and our religion came to be imprecisely known as «Judaism.» Eventually (I don’t know when), the term «Judean» was shortened to the now familiar «Jew.»

We start this story during the time of the First Holy Temple, built by King Solomon. Late in the First Temple era, the Assyrians came to power, and conquered many lands. They conquered the Kingdom of Israel, and exiled the Ten Tribes to far away lands. The Holy Temple was in the Kingdom of Yehudah, and so it was not touched. The Assyrians had the policy of moving conquered people from their native country to distant lands, as a method of controlling them. In place of the people of Israel, they moved people from the ancient land of Cutha into Samaria, a region in Israel. The location of the land of Cutha has long been forgotten, even by the Cutheans themselves. Now they call themselves Samaritans. The Samaritans hated the Yehudim, and caused them a great deal of trouble.

Eventually, the Babylonns came to power, and they began to conquer that part of the world. Among the many conquests of the Babylonns, they defeated Yehudah, destroyed the Holy Temple in 3338 (423 BCE), and exiled her people to various countries, taking most of them to Babylon. For seventy years there were no Jews in Yehudah.

The Prophets of G-d had foretold these events centuries earlier. They also prophesied that Yehudah would return after seventy years and rebuild the Holy Temple. Our exile in Babylon did indeed last only seventy years. During that exile, the Medians overcame the Babylonns, and were themselves overthrown by the Persians. It was during the Persian reign that we were granted the permission to return to Yehudah and rebuild the Holy Temple.

After that seventy-year exile many of the Yehudim returned to Yehudah, but most did not. Many stayed in their places of exile. Thus, we have Jews who have been living in places like Yemen and Iraq (Babylon) ever since the Babylonn Exile, over 2420 years ago.

Slowly, we rebuilt the Holy Temple, despite the cruel attempts of the Samaritans to harm us and prevent our rebuilding the Temple. The Temple was completed in the year 3408 (353 BCE).

The Persian Empire did not last very long, though Persian historians later added a fictitious 166 years to their history. (Historians today still accept those 166 non-existent years, and it throws off many calculations.) The Persian Empire was replaced by the empire of Alexander the Great. Thus, Yehudah and Samaria came under Greek rule. The Greeks called Yehudah «Iudea.»

Alexander the Great kept a tight but mostly benevolent command over his empire. The Samaritans persuaded Alexander the Great to destroy Jerusalem, telling him that the Iudeans were disloyal, but their efforts were thwarted. Alexander met the leader of the Idueans, Simon the Just, and decided to spare Jerusalem and the Holy Temple.

Alexander attempted to create a new universal culture that would bind his empire and keep it together. He blended the Greek religions with Eastern philosophy, and built temples and gymnasiums throughout Egypt and Iudea to spread these new teachings. He founded Alexandria to be the seat of this new culture, and peopled it with members of every nation.

A large number of Jews eagerly embraced this new culture. They became known as the
«Hellenisers.» Not satisfied with simply rejecting their ancestral Torah Traditions, they also vied for power. They convinced the Greeks that the most prestigious political position among the Iudeans was the post of High Priest. They then proceeded to periodically buy the position of High Priest from the Greeks. They were incapable of fulfilling the functions of the High Priest, and so Assistant High Priest would most often do the job.

After Alexander’s death, his immense empire fragmented, and was divided between three of his generals, who fought constantly. Iudea and Samaria fell temporarily under the control of the Egypt-Greek empire, which is known as the Ptolmaic Empire.

These Greeks were also drawn to knowledge, and happily traded philosophy whenever they could, especially where it would help them control their subjects. But their wisdom was superficial, and concerned with outer beauty, instead of inner beauty. They were most concerned with their own beauty, and the beauty of the works of their own hands, which was indeed impressive. The Greeks, in love with themselves and their bodies, gave the world the word «narcissism.»

Similarly, they noticed Judaism, and in attempting to glean from it knowledge they deleted the essence and kept the trappings. It was Ptolemy II who locked up seventy-two Rabbis and forced them to translate the Written Torah into Greek, deliberately divorcing the words from their meanings by ignoring the Oral Torah.

The Written Torah was mistaken by the Greeks for a code of Law within itself, and that error has never been successfully corrected among Gentiles. This work, the original Septuagint, was rewritten by Gentiles numerous times, became the basis of the Saduccean Heresy, and eventually was incorporated into the Christian Bible. It bears today, little resemblance to the Hebrew original.

The spread of Hellenism had its unfortunate effects on many Jews. During this era, there sprung up a heretical group known as the Tzadokim (which the Greek language turned into «Sadducees»). This group was created by a man named Tzadok (hence «Tzadokim«). Tzadok actually wanted to erase all of our religion, but he felt that he wouldn’t succeed, so he began by claiming that we must follow only the Written Torah and reject the Oral Torah. They assumed many of the aspects of Hellenism. That is the form that the Saduccean religion kept for as long as they lasted.

The mainstream Rabbis called themselves the Separatists, or in Hebrew—the «Perushim,» which Greek later somehow turned into «Pharisees.» It was not a political separatism that they espoused, but a religious separatism, isolating themselves from syncretism and other harmful influences. Syncretism is the practice of adding ideas from other religions, something which is strictly forbidden by the Torah. Therefore, Judaism has included nothing at all from other religions. Whenever people have included acts or beliefs that do not belong to Judaism, the Rabbis have always acted very sternly and effectively to remove any such influences from our people. At times, however, people would break off and create their own movements, and refuse to listen to the Rabbis. That was how the Sadducee Movement was created.

The Sadducees, who were mostly rich priests, often bought the position of High Priest from the Greeks. The Sadducees infiltrated the Sanhedrin as well, the highest Jewish court, and finally the Sages abandoned the Sanhedrin and reformed under a different name. (Thus the Sanhedrin mentioned in the Christian Bible was actually a Sadducee organization, not a Pharisee one.) 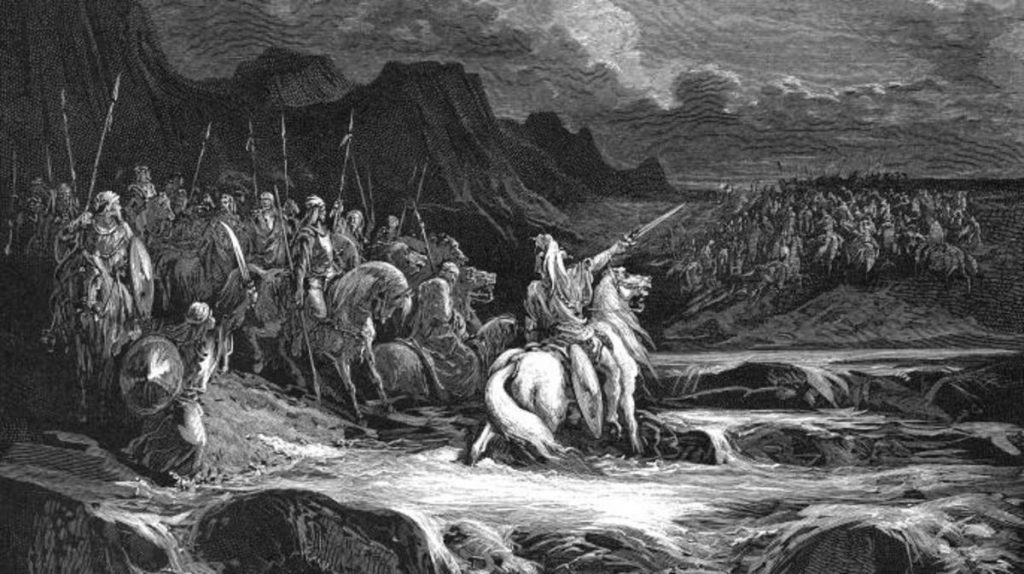 Jehudah Maccabaeus leading his Jewish army, the Maccabees, into battle.

Ptolemy V was king of the Ptolmaic Empire, but he was too weak a king to keep all of his empire, and the Syrian-Greeks under Antiochus III wrested away Iudea and Samaria. His kingdom was known as the Seleucid Empire.

Antiochus III’s successor, Antiochus IV, was not as subtle or as philosophical as Ptolemy IV and V. In order to consolidate his control, he would force all conquered peoples to assume the Greek religion. The Syrian-Greeks would often add the gods of the conquered peoples to their own pantheon as well. (This was a pattern later followed by the Catholic Church, which led them to adopt local gods as «saints.»)

This worked in most places, but not with the Yehudim. Our religion does not allow any
syncretism. To be sure, the Greeks succeeded in converting many of us. Tragically, some Yehudim abandoned their faith and accepted Hellenism. But most withstood the test, and openly fulfilled their religion.

The Greeks, fearing that they would lose political control of Iudea, enacted barbaric punishments against anyone found teaching, studying, or practicing Judaism. They defiled the Holy Temple by using it as a pagan temple. They forced many Yehudim to bow before Greek idols. They outlawed circumcision. They killed anyone they found celebrating Sabbath or Rosh Chodesh (the New Month).

Antiochus did not mind the Jews worshiping Hashem, as long as they also worshiped the Greek gods. They erected idols in every city, and forced all the Jews to bow down to them, in violation of Jewish Law.

Finally, a man named Mattisyahu (Mattathias) the Priest, of the family of Hasmonea, arose and organized a revolt. He, his children, and a small band led by his son Yehudah Macabee, fought the Greeks against overwhelming odds, and won many battles. They did not gain any political victories, nor did they regain any land. The only temporal victory gained was the reclamation of the Temple Mount, and the ability to practice our religion.

That day they regained the Temple Mount. They cleaned and purified the Holy Temple, dismantled and rebuilt the defiled Holy Altar using fresh stones, and resumed the Temple Service. As the Torah commands, they rededicated the Altar. They therefore performed the eight-day Rededication Ceremony. The Hebrew word for dedication is «Chanukah.»

The Sages then understood that a greater victory had taken place here. The Torah had vanquished assimilation and the darkness of the superficial Greek «wisdom.» A lesson had to be taken for all time. So the next year they instituted a new Holiday, named after the Rededication Ceremony. Thus we have an eight-day Holiday called Chanukah, during which we light oil or candle lights, sing praises to G-d, and study G-d’s Torah.

Chanukah does not celebrate any political or temporal victory, because there actually was none at that time. Chanukah does not celebrate the conquering or regaining of land, because it was not a war over land, and in fact we did not gain any land at that time. (Remember, the Hasmoneans were priests, and priests were not even allowed to own land in Israel.)

Chanukah celebrates our freedom to worship G-d without the negative influences of the cultures around us.

What had happened? The Hellenists (Greeks) had forced us to stop keeping Judaism. They prevented us from fulfilling the Commandments of the Torah. They entered our Holy Temple, disrupted the Services, and used the Holy Temple for idol worship.

The Hasmoneans took back the Holy Temple, and gave us once again the ability to continue observing the Torah and Commandments. No longer did we have to worship idols, as the Greeks were forcing us to do. No longer did we have to accept foreign ideas from other cultures and other religions. Now we could keep the Torah as Hashem had commanded us to.

That is what we celebrate on Chanukah.